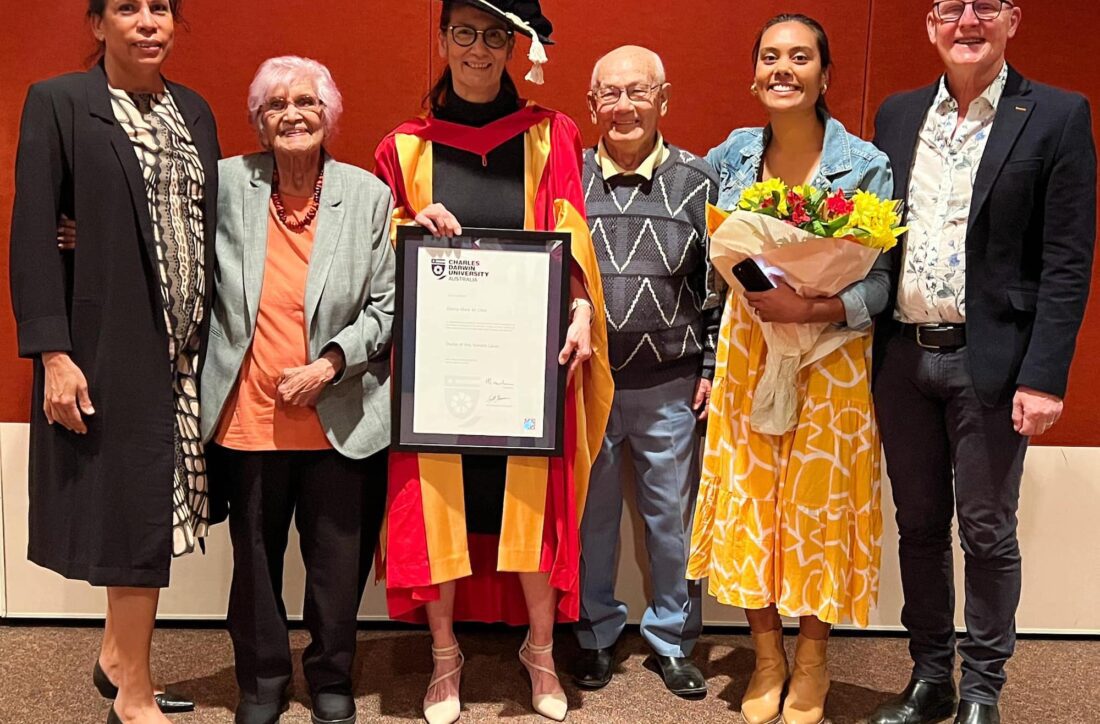 Ms Ah Chee was awarded the Honorary Doctor of Arts in recognition of her significant contribution to the health of First Nations peoples.

“I have known Donna for many years, and during all that time her dedication to the movement for health and justice for Aboriginal people has been well known across the country and she has recently celebrated twenty years at Congress. She has always been there for the long haul for our people,” he said.

“Her advocacy to improve health and education outcomes for our communities, and her firm commitment to holding governments accountable for ‘closing the gap’ has earned her a national profile as an Aboriginal leader.”

“Donna is always available and is great listener and understands deeply the needs of our communities and their strong desire for community controlled health services.”

“Under her leadership, Congress has developed into what internationally renowned public health expert Professor Fran Baum has described as one of the best comprehensive primary health care services in the world,” he said.

He added: “Over the last two years she has led Congress’ response to the threat of COVID, and she has made a significant contribution to keeping both Aboriginal and non-Aboriginal people in the Northern Territory relatively safe from that disease.”

Ms Ah Chee is a Bundjalung woman from the north coast of New South Wales, but she has lived in Central Australia for over 30 years.

She has made a significant contribution to the health of Aboriginal people through her leadership in primary health care, research, education and public health. She has been instrumental in developing and implementing a culturally responsive and comprehensive approach to primary health care which has been highly influential in reforming service delivery across the Northern Territory.

She has also made important contributions to reducing the harms that alcohol causes, and to improving early childhood outcomes for Aboriginal children.

She has been appointed to numerous high level Aboriginal health and government boards including serving as Chairperson of the Aboriginal Medical Services Alliance Northern Territory (AMSANT), as Chairperson of the Northern Territory Aboriginal Health Forum, a director of the National Aboriginal Community Controlled Health Organisation (NACCHO) and an expert member of the National Aboriginal and Torres Strait Islander Health Plan Implementation Advisory Group. She served as Chair of the Aboriginal Benefits Account (ABA) and has been appointed as the independent chair of the inaugural NT Children and Families Tripartite Forum

“In spite of all these achievements she still remains as humble as the day she got her first job, and it is wonderful that she is getting this acknowledgement from others and our community celebrates this award with her.”

“I would also like to thank Charles Darwin University for recognising the contribution she has made in this important way.”