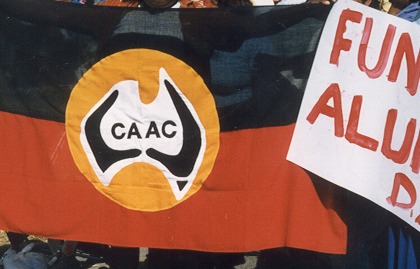 Aboriginal people are the original inhabitants and owners of the continent of Australia. Today, just over two hundred years after the invasion of non-Aboriginal people, we are a minority in our own land.

However, while in Australia as a whole, approximately 2% of people are Aboriginal, here in the Northern Territory, our peoples make up around a quarter of the population. This is because colonisation came late to north and central Australia; it was not until early this century that non-Aboriginal people established significant settlements in the region.

While non-Aboriginal people have taken much of the ancestral lands of our peoples, and reduced many of them to states of poverty and ill-health unknown before the invasion, we continue to resist colonisation. Since the 1970s, one form of this resistance has been the setting up Aboriginal community-controlled services: legal aid services, infrastructure organisations, land councils, and community controlled health services. These non-government organisations continue the struggle against ill-health, poverty, injustice and dispossession.

Before Northern and Central Australia were colonised by Europeans the nomadic lifestyle of our peoples, their free access to the land and its resources and their own traditional medicine, ensured that they were relatively free of the health problems that now beset them.

Since colonisation, our peoples have suffered from extreme poor health. Diseases almost unknown in white Australia for fifty years are still relatively common in our communities. During the last twenty years or so, government has tried various policies and programs to improve the poor level of health amongst our people. These policies have failed; the health of our people remains a national disgrace and an international embarrassment. The statistics about Aboriginal illness and illness patterns are well known. These figures vary greatly across Australia, but generally are worse in the Northern Territory.

Over the last forty years, the Aboriginal infant mortality rate has declined (though it is still around three times the national average); over the same period, adult mortality in the Aboriginal population has increased [ABS and AIH&W]. These figures themselves illustrate the failure of all Australian governments to deal effectively with the health needs of our peoples.

The Aboriginal Medical Services Alliance of the Northern Territory [AMSANT, the peak body of Aboriginal Community Controlled Health Services] says that for the health of our peoples to improve, Aboriginal health must be in Aboriginal hands.

Until our right to run our own health services under our own control is recognised in principle and supported in practice by an Australian non-Aboriginal government, our health will not improve.