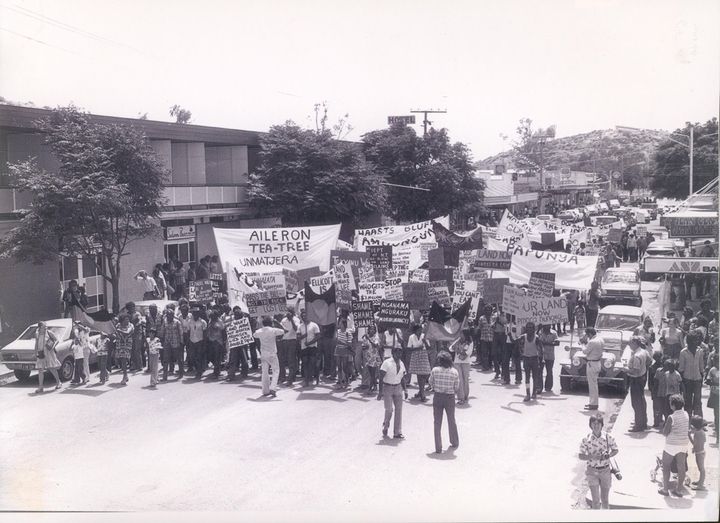 We pay respect to traditional owners and to the wider community. Be mindful that the image shown here includes deceased people. Please show respect and be careful.

On this day, 12th March 1976 (45 years ago), more than 500 Aboriginal people protested in Alice Springs for land rights.

You can see from the banners that people came from all across central Australia. Congress helped to raise funds from private donations, organise transport, and send a delegation to meet with leaders in Sydney and Canberra.

Prime Minister Malcolm Fraser had been elected just 3 months earlier following the controversial ‘dismissal’ of Labor Prime Minister Gough Whitlam who was ‘sacked’ by the Governor General. Prime Minister Fraser had promised to continue the push for land rights in the Northern Territory that Whitlam had started. A Royal Commission, led by Justice Woodward, had recommended land rights legislation and the formation of land councils. Central Land Council had formed in 1975 but there was still no legislation for Aboriginal people to claim their land rights.

Aboriginal people of central Australia had formed Congress in 1973 to promote their interests. They saw control and care for their lands as critical for health. 9 months after this protest, on 16th December 1976, the Aboriginal Land Rights (NT) Act became part of Australian law.

If you want to tell us a story about this photo or other Congress early history, please email congress.history@caac.org.au