Big meeting to set up Congress 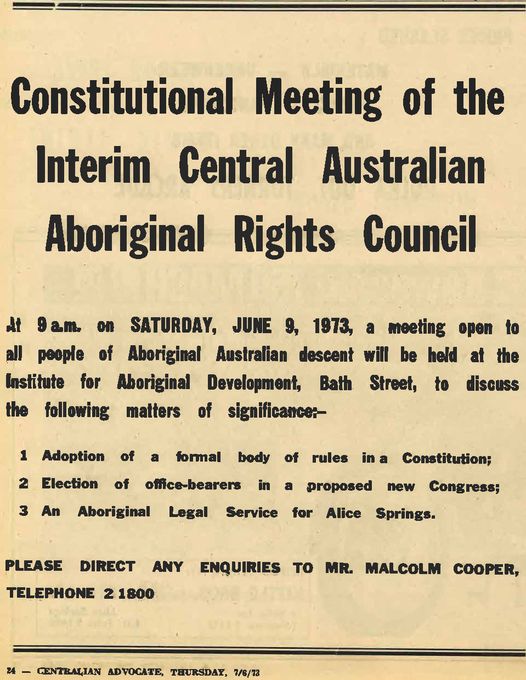 On this day in 1973, Aboriginal people in central Australia held a big meeting to set up Congress. Neville Perkins, the founder of Congress and its first general secretary, shares his memories:

“We were working on setting up the legal service [CAALAS, now part of NAAJA]. And we talked about having another Aboriginal organisation that would represent the rights and interests of Aboriginal people generally, that would be a voice for Aboriginal people in Central Australia. I went around and spoke to a number of people in town and out bush. We had our first meeting, round in Bath St, at that old institute. That was incredible! There was 80 to 100 people, from right around. In those days, eh?

First we had what we called an interim Central Australian Aboriginal Rights Council; that was just a working group to help set up the Congress and develop it and to draw up a constitution. And to start representing the rights of Aboriginal people in Central Australia; and we did that working in with CAALAS.

You might say it was like a revolution. All of sudden there were these Aboriginal people, a small group of us, trying to get this Aboriginal organisation going to try and change the world for the better for Aboriginal people.”

Congress will be 50 years old in two years time! Get in touch with the Congress History Project team if you would like to tell your story. And look for us at the Show! Email us at congress.history@caac.org.au or call us on 08 8959 4734.